Among the many effects of opioids is their role in food consumption and taste preferences. Barbano and Cador (2007), Castro and Berridge (2014a), and Peciña and Smith (2010) provide current reviews of the literature. In particular, opioids modulate the pleasure or palatability associated with food-related stimuli. Naloxone significantly reduces food consumption in either food-deprived or non-deprived animal subjects, as well as eating induced by stress, by metabolic needs, or by stimulation of brain sites that elicit feeding. The hypothesis that opioids specifically regulate the palatability or at least the reward value of highly palatable food has received considerable support. You learned in the chapter on drug abuse (see Chapter 9) that the rewarding aspects of abused substances leading to compulsive use involve both hedonic factors (“liking”) and incentive motivation (“wanting”). It is of considerable interest that those two factors also contribute to food reward, and opioid systems have been strongly implicated in both phenomena. One question that remains is whether compulsive overeating resembles drug abuse in other significant ways.

Endogenous opioid signaling, and μ-receptor signaling in particular, seem to modify the preference or liking of some foods over others in humans and other species. Opioid antagonists reduce consumption of a highly palatable food (such as chocolate cookies) and reinstate consumption of standard rat food pellets, while systemic morphine administration increases chocolate cookie consumption without increasing standard food consumption. Experiments show that morphine increases fat consumption in fat-preferring rats and carbohydrate consumption in carbohydrate-preferring rats. Although opioids seem to modulate palatability, some evidence suggests that the degree of palatability may depend on the ability of particular foods to enhance endogenous opioid activity. For example, when sucrose concentration is increased, the inhibitory effect of naloxone on consumption of sucrose solution is reduced. This may occur because the higher sucrose dose dependently increases the endogenous opioids, making them harder to inhibit with the antagonist. Further support comes from the finding that ingestion of a sweet solution or fat produces opioid-like analgesia and also potentiates the analgesic effects of morphine. Hence these and other studies indicate that sucrose and other palatable foods increase endogenous opioids.

In addition to modulating the liking of sweet or fatty foods, opioids modify the motivation or incentive toward those substances, as shown in experiments where μ-agonists increase the willingness of rats to lever press for palatable food reinforcement. In a similar manner, the μ-opioid agonists make food stimuli and cues associated with food more motivationally relevant, hence harder to resist. Additionally, opioid antagonists reduce the motivation for sweet or fatty food, as shown by reduced running performance for food reward.

Limbic brain regions appear to be the locus of opioid receptor–mediated effects on food palatability. The microinjection of morphine and selected opioid agonists into the nucleus accumbens (NAcc) elicits increased consumption, particularly of palatable foods. Of particular interest is the finding that subregions of the NAcc may independently control the liking (i.e., pleasure) and wanting (i.e., craving) of food. One subregion (rostrodorsal quadrant) within the NAcc medial shell has been identified as the major “hedonic hot spot,” because microinjection of a μ-receptor agonist increases the liking response to sucrose by several times (see Peciña and Smith, 2010). Liking is quantified in rodents by the orofacial affective reactions to an infusion of sucrose (or other substance) directly into the mouth. That response is accompanied by a significant increase in the motivation to eat (wanting). However, one significant difference between the liking and the wanting responses is that the hedonic response is highly localized to the rostrodorsal hot spot while the loci for motivation to eat (measured by the amount of spontaneous eating) are widely distributed throughout the entire medial shell of the NAcc and extend to a network of brain regions that respond to opioid stimulation by increased eating. Hence there are large areas where μ-agonists enhance the craving for the food without enhancing the pleasure. More recent research by the same group has verified the hot spot site as well as the hedonic “cold spot,” a region in the posterior half of the medial shell that when stimulated with microinjection of opioids, reduces the pleasurable reactions to sucrose by at least half compared with control levels (Castro and Berridge, 2014b). Further, Figure 1 shows that each of the opioid receptor subtype agonists (μ, δ, and κ) could enhance or suppress the liking of sucrose and that there are common regions (shared substrate) where all three agonists produced similar enhancement or suppression of liking. The distinctive functions of these regions of the NAcc is likely due to differences in anatomical connectivity with other brain areas, although histoarchitectural differences of the cells in those regions have also been noted. This type of research may help us understand disorders that are characterized by excessive compulsive wanting, such as drug abuse, binge eating, and obesity, as well as instances of anhedonia (failure of hedonic pleasure) as found in clinical depression. 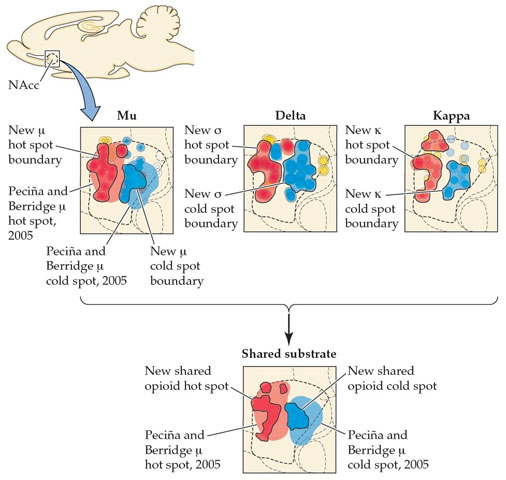 Figure 1 Location of hot and cold spots in the NAcc medial shell. The maps show microinjection sites within regions of the NAcc medial shell where μ-, δ- and κ-agonists enhance sucrose “liking” (rostral hot spots) and suppress sucrose “liking” (caudal cold spots). The shared substrate map shows the regions producing enhanced or suppressed “liking” by all three subtype agonists. In the case of μ-agonists and shared substrate maps, the present data are seen to verify earlier work by the researchers (Peciña and Berridge, 2005). (From Castro and Berridge, 2014b.)

Since the dopaminergic mesolimbic neurons terminating in the NAcc are considered to be involved in central reward mechanisms, a link has been established between opioids, feeding, and reward mechanisms. The neurobiological similarities between obesity and drug abuse have prompted some researchers to consider the possibility of food addiction (see Stice et al., 2013). Although much attention has been paid to the NAcc, it has become clear recently that liking and wanting are linked together via a network of interconnected brain regions in the limbic forebrain that use opioid neurotransmission.

The evidence supporting a role for opioid modulation of both the hedonic characteristic of feeding and the motivation for palatable foods has suggested that drugs targeting opioid systems may represent an approach to the treatment of obesity, a condition that is becoming increasingly worrisome because of its link to diabetes and heart disease. Studies with rodents show that naloxone reduces food consumption to a greater extent in genetically obese animals than in normal-weight littermates. In a similar manner, animals that have become obese by eating a palatable high-calorie diet respond to naloxone treatment by eating less. It is of interest that selective μ-antagonists reduce body weight as well as fat content in sedentary, obese mice but not in lean mice. Furthermore, the same antagonists increase wheel running in obese but not in lean mice. In humans, preference for sucrose and fat is increased by the opioid agonist butorphanol and reduced after naloxone administration. In other studies, the antagonist naltrexone reduced the perceived pleasantness of a variety of desirable foods. Nevertheless, in the clinic, treatment for overeating with the antagonist naltrexone has produced mixed results. Some success has been reported for binge eating, but long-term eating compulsions have been more resistant to treatment. Clearly, compulsive eating and obesity is a complex phenomenon that involves genetics, personality factors, lifestyle choices, and socioeconomic issues as well as reinforcement, so it is possible that only a subset of obese individuals may be helped by opioid antagonism.