Bioassays are important and classic tools of pharmacology that provide relatively quick and inexpensive tests of agonist–receptor activity on a biological response. The assays generally measure a simple response in a tissue that is in its native functional state rather than a highly modified (e.g., homogenized cells) nonphysiological condition. Such measures are often used to demonstrate the biological relevance of a newly identified receptor protein. Under ideal conditions, receptor binding and biological response should be measured in the same simple, intact system before disruptive procedures are performed on the cells.

The most accurate bioassay to measure opioid activity was developed by a pioneer in opioid research, Hans Kosterlitz (Kosterlitz et al., 1970). The guinea pig intestinal muscle (ileum) and associated neuronal connections are dissected and maintained in a physiological solution. The muscle is fastened at each end to maintain a fixed tension, so that when the neurons are electrically stimulated, the muscle twitch can be recorded on a polygraph. The twitch is inhibited by opiate drugs, which inhibit the release of neurotransmitter from the stimulated nerves. This inhibition can be blocked by naloxone (Figure 1), which shows that opiate receptors are involved. Further, the magnitude of the twitch inhibition is closely correlated with receptor binding potency. In addition, Kosterlitz and Waterfield (1975) showed that the naloxone-reversible twitch inhibition is almost perfectly correlated with the potency of the opiates to relieve pain in humans (Figure 2). Therefore, it is apparent that a correlation exists between analgesic effects in vivo, muscle-twitch inhibition in the bioassay in vitro, and the ability to bind to opiate receptors. Clearly the bioassay represents a simple and rapid means to screen opioid drugs. 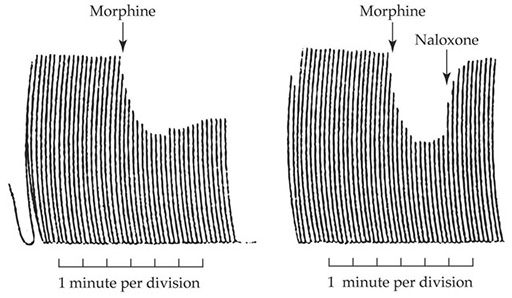 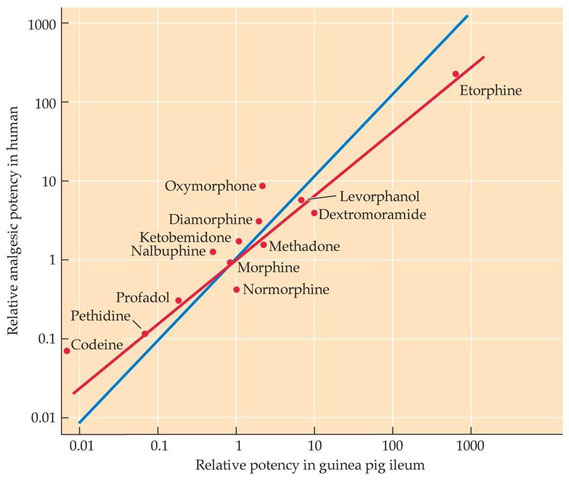 Figure 2  A strong positive correlation (shown by the red line) exists between opiate inhibition of guinea pig ileum twitch and analgesic effects in humans. For comparison purposes, the blue line represents a perfect correlation. The values for potency were calculated relative to morphine (morphine = 1). (After Kosterlitz and Waterfield, 1975.)