Alcoholics Anonymous (AA) is an organization established in 1935 and found in over 180 countries around the world with an estimated 2 million members who, as the name suggests, remain anonymous outside the AA community. It is among the best known alcoholism treatment programs and is run not by treatment professionals, but by the alcoholics themselves who believe they have a special understanding of the problem and can help others to become sober. Each group meets once or twice a week and several members may informally share their personal experience with alcohol abuse, describe how AA has helped them, and describe  ways he/she deals with the struggles of staying abstinent. In these “open meetings” family and friends are permitted to attend, and the goal is to reaffirm the speakers’ sobriety and provide support and encouragement to help others to recover from alcoholism. In the “closed meetings” only alcoholics are permitted to attend. At these meetings help with personal problems in daily living that are making sobriety difficult can be sought from other members. The emphasis is not on the long-term but instead abstaining from alcohol one day at a time. Additionally the “Twelve Steps” program may be utilized, to enhance spiritual growth and emotional development. These twelve steps are listed below.

The Twelve Steps of Alcoholics Anonymous

1. We admitted we were powerless over alcohol—that our lives had become unmanageable.

2. Came to believe that a Power greater than ourselves could restore us to sanity.

3. Made a decision to turn our will and our lives mover to the care of God as we understood Him.

4. Made a searching and fearless moral inventory of ourselves.

5. Admitted to God, to ourselves and to another human being the exact nature of our wrongs.

6. Were entirely ready to have God remove all these deficits of character.

7. Humbly asked Him to remove our shortcomings.

8. Made a list of all persons we had harmed, and became willing to make amends to them all.

9. Made direct amends to such people wherever possible, except when to do so would injure them or others.

10. Continued to take personal inventory and when we were wrong promptly admitted it.

11. Sought through prayer and meditation to improve our conscious contact with God, as we understood Him, praying only for knowledge of His will for us and the power to carry that out.

12. Having had a spiritual awakening as the result of these steps, we tried to carry this message to alcoholics, and to practice these principles in all our affairs.

AA groups are self-governed and each one develops their own style of meeting. The group is self-supporting through their own voluntary contributions and it gets no outside financial help. Further, AA is not affiliated with any religious, medical, or psychiatric organization and has no rules beyond an individual’s sincere desire to maintain sobriety.

The self-help style of AA is not appealing to everyone. Many object to the spiritual/religious tone and some have considered AA to be a quasi-religious organization. Others object to the group approach for a personal problem. Some erroneously believe that AA forbids the use of any medication as part of the therapeutic process, but the official position of AA is that the members’ physicians should make the decision regarding use of medications. Dropout rate from the program is high. Summarizing survey data collected between 1977 and 1989, the parent group AA World Services reported that over 30% dropout after one month, more than 50% leave by the end of the third month, and only 25% remain in the program after one year. (Source: https://www.scribd.com/doc/3264243/Comments-on-A-A-s-Triennial-Surveys.)

In part because of the high dropout rate and other variables, the evaluation of program effectiveness produces highly divergent results. Reviewing the literature, Kaskutas (2009) found that abstinence rates at 1 year and 18 months for those alcoholics attending AA are about twice as high (40–45%) as those not attending (Figure 1) and greater involvement in the program was associated with higher levels of abstinence in a dose-dependent-like fashion (Figure 2). In an effort to improve abstinence rates, researchers tested “intensive referral-to-self-help” compared to normal referral techniques. Intensive referral included linking patients to 12-step volunteers and encouraging the use of 12-step journals. This was associated with better attendance and greater involvement with the group (e.g., reading 12-step literature, doing service at meetings, and gaining self-identify as a self-help-group member) as well as higher abstinence rates of 51% after one year compared to the more typical 41% following standard referrals (Timko and DeBenedetti, 2007). However, in other studies, when compared with cognitive behavioral therapy, no difference in abstinence was seen, although the cost of mental health care was clearly lower for those attending AA. In one of the few experiments conducted that randomly assigned alcohol-dependent individuals to one of three treatment styles, alcohol abusers assigned to inpatient hospital care showed twice the abstinence rate (35%) after 2 years compared to AA or a “choice-of-treatment” group (Figure 3). 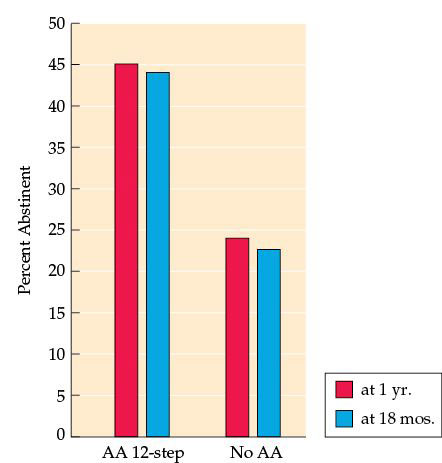 Figure 1 Abstinence rates at 1 year and 18 months for male inpatients at a Veterans Administration Hospital attending AA and those not attending. At 1 year there were 3018 subjects; at 18 months there were 91. (After Kaskutas, 2009.) 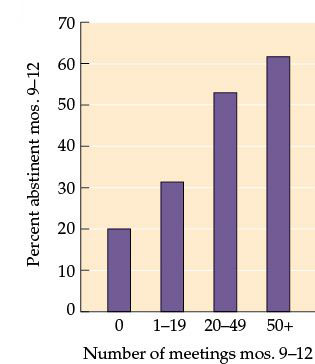 Figure 2 response of number of AA meetings attended during months 9–12 and percent abstinent during the same period. Results are based on 2376 male Veterans Administration residential patients. (After Kaskutas, 2009.) 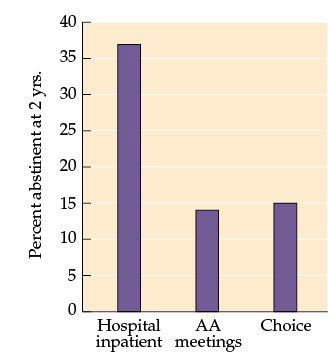