Alcohol is generally believed to elicit violence and aggression. Many reports show that the majority of individuals who commit violent offenses are under the influence of alcohol at the time of the crime. One 1997 survey reported that 42% of state prisoners and 25% of federal prisoners who were convicted of violent crimes including murder, rape, and assault had used alcohol at the time of the incident. In one-half to two-thirds of homicides, the offender, victim, or both were intoxicated. Overall, at least 50% of rape cases involve alcohol. In Pasadena, California, over a 2-week period, 50% of all arrests, 60% of rapes, and more than 50% of domestic assaults involved alcohol (Jung, 2001). In addition, alcohol intoxication is significant in many types of violent deaths including fire (46%), drowning (53%), and pedestrian deaths (27%).

Although these statistics are striking, keep in mind that such correlations do not constitute evidence that alcohol pharmacologically induces aggression. In our society, alcohol and violence frequently occur together, but as is true for all correlations, no cause-and-effect relationship can be assumed. After all, drinking alcohol may lead to aggression, but behaving aggressively may produce guilt or fear that causes drinking. Or, a third factor may be responsible for both behaviors. For instance, a personality factor such as impulsiveness or hyperactivity may lead one to be more aggressive and may also lead to greater alcohol consumption.

Laboratory studies measuring the tendency to “punish” an unseen individual generally show that alcohol increases aggression compared to controls. However, these situations are not readily generalizable to real-life situations where aggression is face-to-face and conducted in a complex setting. Furthermore, when balanced placebo designs are used, the role of expectancy (i.e., a subject’s believing he received alcohol) on aggression in both provoked and unprovoked situations is more important than whether the individual actually receives alcohol (Figure 1). Finally, cross-cultural studies suggest that alcohol-induced aggression is not a universal occurrence and that, in contrast to other cultures, many Americans view being intoxicated as a legitimate occasion for aggressive and other socially inappropriate behaviors. 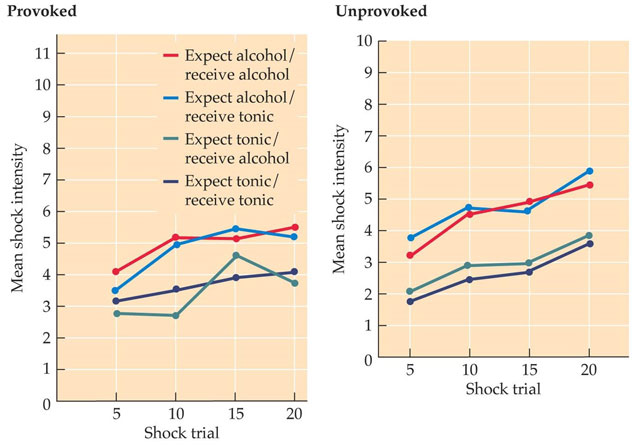 Figure 1 Expectancy of alcohol increases aggression In both provoked and unprovoked situations, the subjects who expected to receive alcohol delivered stronger shocks to “punish” an unseen individual than those who expected tonic (regardless of what they actually received). (After Lang et al., 1975.)

Chermack and Giancola (1997) provide a model to show the multiple factors that may interact with the pharmacological effect of alcohol consumption in determining the occurrence of violent behavior. Based on this model, early childhood experiences may set the stage for future aggressive acts. Psychiatric disorders, current mood, expectancies of alcohol’s effects, and other variables interact with alcohol use and with the immediate situation that the individual finds himself in (threat, provocation, personal relationship). The reciprocal nature of these factors should be clear. For example, alcohol may lead to misinterpretation of social cues or remarks made in jest as threatening, which may influence aggression. But a threatening or provocative situation may also increase alcohol consumption.

We must conclude that there is no simple answer to the question of why alcohol use and violent behaviors are closely correlated in our society. In the meantime, alcohol use does not justify or condone illegal or violent behavior, nor does it diminish personal responsibility for one’s actions.