Why the action potential “takes off” at a particular level of depolarization can be understood by comparing the underlying events to a chemical explosion (Figure 1A). Exogenous heat (analogous to the initial depolarization of the membrane potential) stimulates an exothermic chemical reaction, which produces more heat, which further enhances the reaction (Figure 1B). As a result of this positive feedback loop, the rate of the reaction builds up exponentially—the definition of an explosion. In any such process, however, there is a threshold, that is, a point up to which heat can be supplied without resulting in an explosion. The threshold for the chemical explosion diagrammed here is the point at which the amount of heat supplied exogenously is just equal to the amount of heat that can be dissipated by the circumstances of the reaction (such as escape of heat from the beaker).

The threshold of action potential initiation is, in principle, similar (Figure 1C). There is a range of “subthreshold” depolarization, within which the rate of increased sodium entry is less than the rate of potassium exit (remember that the membrane at rest is highly permeable to K+, which therefore flows out as the membrane is depolarized). The point at which Na+ inflow just equals K+ outflow represents an unstable equilibrium analogous to the ignition point of an explosive mixture. The behavior of the membrane at threshold reflects this instability: the membrane potential may linger at the threshold level for a variable period before either returning to the resting level or flaring up into a full-blown action potential. In theory at least, if there is a net internal gain of a single Na+ ion, an action potential occurs; conversely, the net loss of a single K+ ion leads to repolarization. A more precise definition of threshold, therefore, is that value of membrane potential, in depolarizing from the resting potential, at which the current carried by Na+ entering the neuron is exactly equal to the K+ current that is flowing out. Once the triggering event depolarizes the membrane beyond this point, the positive feedback loop of Na+ entry on membrane potential closes and the action potential “fires.” 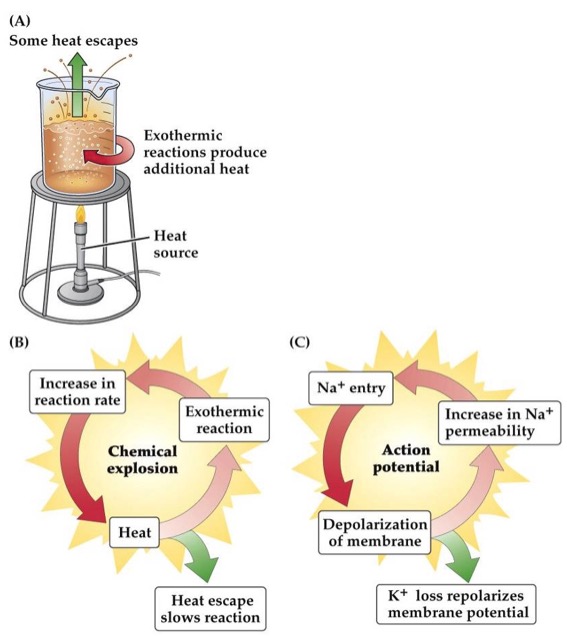