For much of recorded history, romantic love has been the province of poets, painters and musicians. Scientists, it seemed, had little to add—and perhaps it was feared that scientists might steal the mystery from this most intoxicating of human experiences. Nevertheless, over the past decade, neuroscientists have added their interpretation to the countless couplets, cupids, and cantatas that celebrate coupling. The results seem to confirm the suspicions of recent popular songwriters and rock stars that love may actually be a drug.

Beyond inspiring poetry, paintings, and catchy song lyrics, the biological purpose of romantic love seems to be to enhance and reinforce mate selection and bonding for maximal parental effectiveness. Thus, the brain systems that are the most engaged by “being in love” are also associated with reward and reinforcement—the very same systems that are activated, often with disastrous consequences, by alcohol and drugs. In addition, in humans, the state of romantic love (and also maternal love) relies on the activity of two peptide hormone neurotransmitters, oxytocin and vasopressin, that are associated with social recognition and maternal–offspring bonding in diverse species, regardless of whether monogamy and romantic love (or its biological counterpart, pair bonding) are part of the behavioral repertoire. Finally, when a person is in love, the brain regions that normally regulate social interactions—especially those in the cerebral cortex and basal forebrain that enhance social vigilance and caution—are diminished in activity. Thus, love may actually be “blind” to the behavioral cues that in other social encounters would inspire caution.

Monogamy and pair bonding were the first behaviors related to romantic love to be understood biologically. These two behaviors emerge in a few mammalian species, including the prairie vole Microtus ochrogaster. Prairie voles bond with a single mate and remain monagomous (with the occasional exception of a few flings) for life. In contrast, individuals of the closely related species Microtus montanus (montane voles) are promiscuous and do not form lifelong mating pairs. It turns out that these differences in mate selection and preference are matched by differences in the distribution of oxcytocin and vasopressin receptors in the nucleus accumbens, caudate/putamen, and ventral pallidum (Figure 1)—all regions that are associated with reward, reinforcement, and addictive behaviors (see Chapter 31 of the textbook). These regions are also sites of enriched dopaminergic neurotransmission, which is known to contribute to reinforcement, including the maladaptive reinforcement seen in drug-taking behavior. Perhaps not surprisingly, vasopressin and dopamine both influence monogamous mate selection in prairie voles. Thus, when vasopressin antagonists are injected into the ventral pallidum of male prairie voles, monogamy is disrupted, and when dopamine antagonists are injected into the nucleus accumbens of female prairie voles, single-partner preference induced by mating and pair bonding is no longer seen (Figure 2). 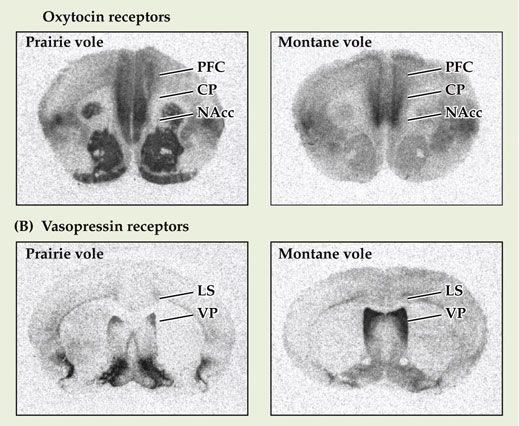 Figure 2  Normal male prairie voles (left) presented with their pair-bonded partner versus a stranger prefer to mate with the partner, based on the amount of time spent in contact. If a vasopressin antagonist is infused into the ventral pallidum, this preference diminishes substantially. Normal female prairie voles (right) also prefer to mate with their pair-bonded partner; however, if a dopamine antagonist is infused into the NAcc, this preference is decreased. (From Young and Wang, 2004.)

The contributions of the nucleus accumbens and of the ventral pallidum and its dopaminergic innevation from the ventral tegmental area (VTA) have led to a clear hypothesis for studying human romantic love: individuals newly in love should have elevated brain activity in all of these regions in response to considering or seeing the object of their affections versus neutral stimuli. Indeed, when male and female subjects monitored using fMRI were presented with images of their beloved versus images friends or acquaintances, maximal brain activity was observed in the caudate putamen and VTA (Figure 3). Moreover, since “love is blind,” it was reasoned that the regions of the brain essential for social vigilance and caution including several cortical regions and the amygdala should be diminished in their activations, which was also the case (Figure 4). These observations placed love somewhat outside of the brain systems that mediate emotion—particularly limbic regions (see Chapter 31 of the textbook). Instead, brain regions essential for reward, risk taking, and social cognition seem to be featured. 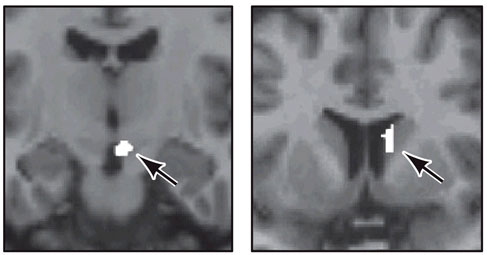 Figure 3  Maximal focal activation in response to the seeing a picture of the beloved versus that of a friend or acquaintance is detected in the ventral tegmental area (left, arrow) and the caudate nucleus (right, arrow) in both young men and women in the early to middle stages of self-identified love affairs.

Figure 4  Brain regions that are deactivated upon seeing a picture of the beloved versus that of a friend or acquaintance. Cortical areas in the occipital/parietal junction (OP), medial temporal (MT), temporal pole (TP), lateral prefrontal (LPF), posterior cingulate (PC), medial prefrontal/paracingulate (MP), and the amygdala (A) are all sites of diminished activation. These same areas are deactivated when mothers view pictures of their own children. (From Fisher et al. 2005; E from Bartels and Zeki 2004.)

Subsequent studies suggest that the ups and downs of love recruit additional brain circuits. Individuals recently rejected by a love interest retain maximal activation in the VTA and caudate nucleus in response to viewing an image of the lost love, but add a number of regions, including cortical regions also associated with motivation, calculation of gain and loss (such as in gambling or risk taking), emotional regulation, and even drug craving that are not activated in the “in love” state. Conversely, when men and women who have been married for significant lengths of time (average of more than 20 years) are presented with images of their spouse versus other familiar individuals, regions associated with attachment—particularly those activated by mother–child bonding—are differentially activated.

While one is unlikely to see Valentine cards reading “You’ve carried away my VTA” any time soon, these results drain neither the passion nor mystery from love. Indeed, while we can identify the neural consequences of attraction and romance, the reasons why the beloved elicits these responses in the first place remain unknown. Nevertheless, these observations point to our subjective experience of romantic love as a key aspect of the overall biology of sex, reproduction, and parenting. The human experience of romantic love activates regions of the brain that favor reinforcement of a connection with a sexual partner, promote exclusivity in mating, and enhance cooperation in the rearing of offspring. These desires—passion, constancy, and domesticity—offer depth of feeling, whether expressed by poets or glimpsed in the fMRI. Thus, love may be like a drug in the best sense, in that it can be highly therapeutic and may benefit those who find it.