The minuscule movement of the hair bundle at sensory threshold has been compared to the displacement of the top of the Eiffel Tower by a thumb’s breadth. Despite its great sensitivity, the hair cell can adapt quickly and continuously to static displacements of the hair bundle caused by large movements. Such adjustments are especially useful in the otolith organs, where adaptation permits hair cells to maintain sensitivity to small linear and angular accelerations of the head despite the constant input from gravitational forces that are more than a million times greater.

In other receptor cells, such as photoreceptors, adaptation is accomplished by regulating the second-messenger cascade induced by the initial transduction event. The hair cell has to depend on a different strategy, however, because there is no second-messenger system between the initial transduction event and the subsequent receptor potential (as might be expected for receptors that respond so rapidly).

Adaptation occurs in both directions in which the hair bundle displacement generates a receptor potential, albeit at different rates for each direction. When the hair bundle is pushed toward the kinocilium, tension is initially increased in the gating spring. During adaptation, tension decreases back to the resting level, perhaps because one end of the gating spring repositions itself along the shank of the stereocilium. When the hair bundle is displaced in the opposite direction, away from the kinocilium, tension in the spring initially decreases; adaptation then involves an increase in spring tension. One theory is that a calcium-regulated motor such as a myosin ATPase climbs along actin filaments in the stereocilium and actively resets the tension in the transduction spring (Figure 1). During sustained depolarization, some Ca2+ enters through the transduction channel, along with K+. Ca2+ then causes the motor to spend a greater fraction of its time unbound from the actin, resulting in slippage of the spring down the side of the stereocilium. During sustained hyperpolarization, Ca2+ levels drop below normal resting levels, and the motor spends more of its time bound to the actin, thus climbing up the actin filaments and increasing the spring tension. As tension increases, some of the previously closed transduction channels open, admitting Ca2+ and thus slowing the motor’s progress until a balance is struck between the climbing and slipping of the motor. In support of this model, when internal Ca2+ is reduced artificially, spring tension increases. This model of hair cell adaptation presents an elegant molecular solution to the regulation of a mechanical process.

Although mechanical tuning plays an important role in generating frequency selectivity in the cochlea, other mechanisms contribute to this process in vestibular and auditory nerve cells. These other tuning mechanisms are especially important in the otolith organs, where, unlike the cochlea, no obvious macromechanical resonances selectively filter and/or enhance biologically relevant movements. One such mechanism is an electrical resonance displayed by hair cells in response to depolarization: The membrane potential of a hair cell undergoes damped sinusoidal oscillations at a specific frequency in response to the injection of depolarizing current pulses (Figure 2). 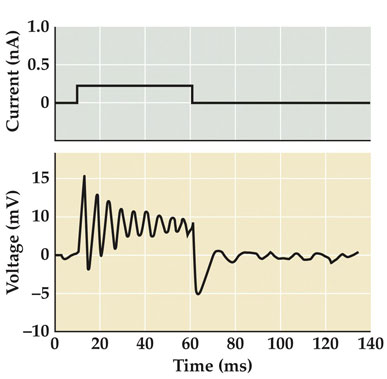 Figure 2 Voltage oscillations in an isolated hair cell in response to a depolarizing current injection (upper trace). (After Lewis and Hudspeth, 1983.

The ionic mechanism of this process involves two major types of ion channels located in the membrane of the hair cell soma. The first of these is a voltage-activated Ca2+ conductance, which lets Ca2+ into the hair cell soma in response to depolarization, such as that generated by the transduction current. The second is a Ca2+-activated K+ conductance, which is triggered by the rise in internal Ca2+ concentration. The interplay between these two currents results in electrical resonance (Figure 3). 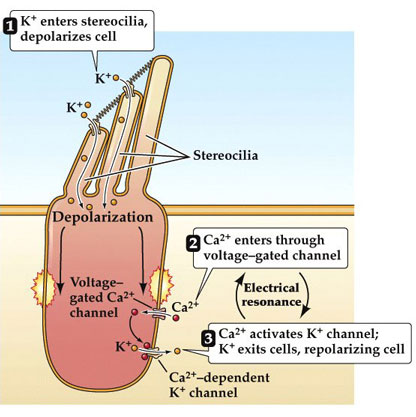