The Death of Hector

The Death of Hector, by Peter Paul Rubens (1577–1640); 43 3 50 in. A modello is the second stage of preparatory designs for a tapestry, following a smaller oil sketch and preceding a larger cartoon. Rubens designed a series of eight tapestries depicting The Life of Achilles, of which The Death of Hector was the seventh. Since tapestry weavers worked from the back of the web, the figures in the modello are left-handed. The scene depicts the fatal thrust of Achilles’ spear (which had been given back to Achilles by Athena after it had first missed its target) into Hector’s throat (Iliad 22.326–329). Hector, armed only with a sword (for his spear, too, had missed its mark, but there was no goddess to restore it), looks at Achilles, still able to ask for a decent burial. His request will be denied, for his body will be dragged round the walls of Troy (shown in the right background with anxious Trojans gathered before the towers of the gate and on the walls) by the horses that appear in the left background. Athena, accompanied by her owl and with a spear in her left hand, hovers above to give encouragement to Achilles. Prominent in the center is the shield of Achilles, the subject of much of Book 18 of the Iliad, and behind it flows the river Scamander. The herm (a column with the head of a divine figure) on the left represents Heracles, who had first sacked Troy (see p. 569): His club rests against the herm. The herm on the right represents Ares, whose head is turned away from Hector. Above two putti hold a cartouche, into which a Latin metrical inscription was inserted in the tapestry. At the bottom is an altar, on which lie two cornucopias filled with the victor’s palm fronds; in its center are two fighting cocks. 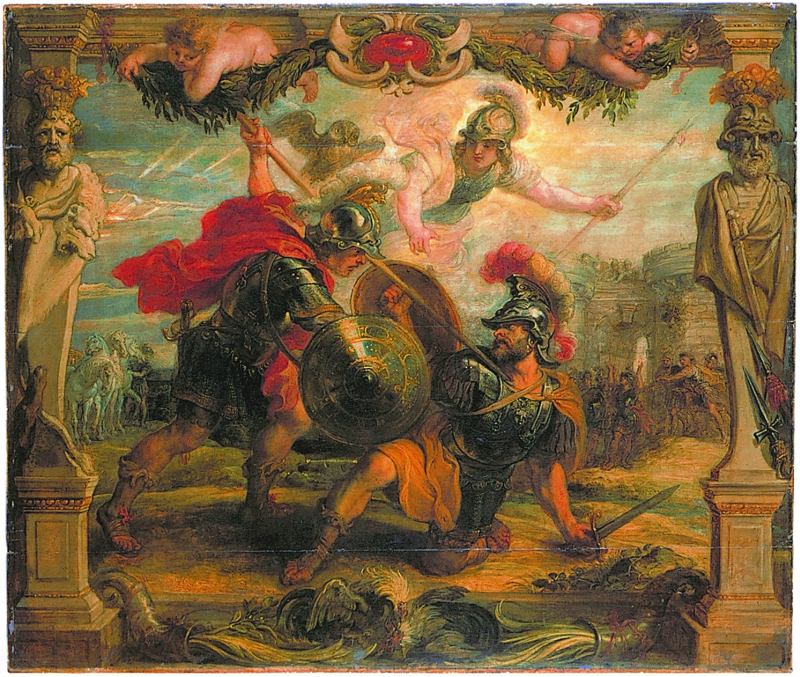