Priam and Achilles. Red-figure skyphos, by the Brygos painter, ca. 490 B.C. This is one of the finest and most striking renderings of the Ransom of Hector. Priam, white haired and holding a walking staff, approaches Achilles from the left. Behind Priam four attendants, two men (shown here) followed by two women, bring the gifts. Achilles reclines on a banquet couch alongside the banquet table still laden with food. The couch, covered with mattress and blanket, is handsomely built and decorated. Achilles is turning to address a serving boy. He holds a piece of meat in his left hand, which rests on two large cushions, and a dagger in his right, which he has brought to his lips. Achilles has not yet noticed Priam’s arrival. Hector’s wounded body can clearly be seen beneath the couch in full view. While this detail is contrary to Homer’s tale, vase painters often included the body of Hector for dramatic effect. Another added feature is the presence of Hector’s (formerly Achilles’) armor on the wall and a shield with a gorgoneion (a representation of a stylized head of a gorgon). The artist has also taken liberties with the timing of the scene. In Homer Achilles has just finished eating when Priam enters. This slight change has resulted in a stark contrast that is particularly gruesome: Achilles eating meat with the corpse beneath, while grease from the food drips onto the bloody body. The horror of the scene is fully realized when one recalls both Achilles’ vow to refrain from eating until he has avenged the death of Patroclus and his threat to Hector, just before he kills him, that if he had the heart he would tear his flesh apart and eat him raw. 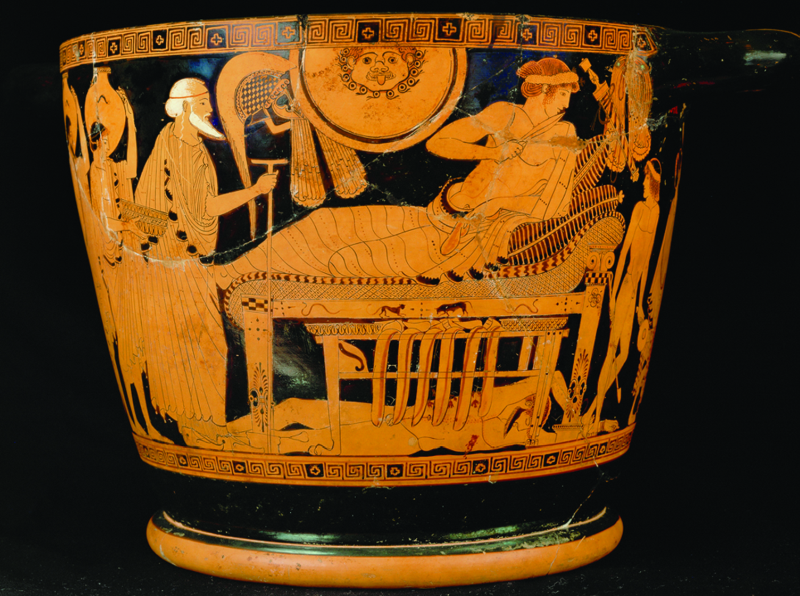