A categorical syllogism is an argument containing three categorical propositions: two premises and one conclusion.

Note that the major premise contains the major term, which is the predicate of the conclusion.

The minor premise contains the minor term, which is the subject of the conclusion.

The premises also contain the middle term, which appears once in each premise but not in the conclusion.

B.  Mood and Figure

When a syllogism is in standard-form, the middle term can appear in four possible ways, reflecting the figure of the syllogism:

Together, the mood and figure tell us everything we need to know to test a standard-form categorical syllogism for validity.

C.  Diagramming in the Modern Interpretation

Here are the steps for diagramming the premises of a categorical syllogism in the modern interpretation: 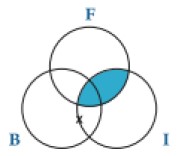 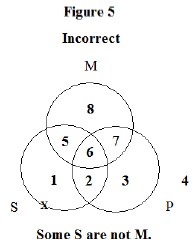 D.  Rules and Fallacies in the Modern Interpretation

E.  Diagramming in the Traditional Interpretation 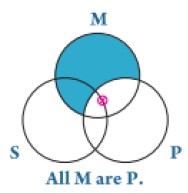 We can tell from the shading and encircled x that we have a universal affirmative (“All M are P”).

F.  Rules and Fallacies Under the Traditional Interpretation

Only Rule 6 is different under the traditional interpretation, since universal propositions assert existential import. A syllogism can be provisionally valid with two universal premises and a particular conclusion; this means that we need to determine whether or not the term needed to make the conclusion true denotes actually existing objects. If it does, then the syllogism is valid; otherwise it is invalid.

Ordinary language arguments can be analyzed either by Venn diagram or the rules of the syllogism. First, however, several guidelines must be followed:

We saw in Section G that some categorical arguments contain too many terms. There are also arguments, called enthymemes, which are incomplete. That is, the argument may contain only one premise and a conclusion, only two premises, and so forth. In these cases, the goal is to make the argument complete, so that it can be rewritten as necessary in standard-form.

Still another type of incomplete argument (enthymeme) is the sorites. This is a chain of premises that lack intermediate conclusions, in which the goal is to establish a complete categorical syllogism that can be tested for validity. If any syllogism in the chain is invalid, the sorites is invalid.

The first step in the process is to rewrite the argument so that the premises appear one on top of another, with a line demarcating the chain of premises from the conclusion:

The first two premises are used to yield an intermediate conclusion, which then becomes a premise in the next sequence: